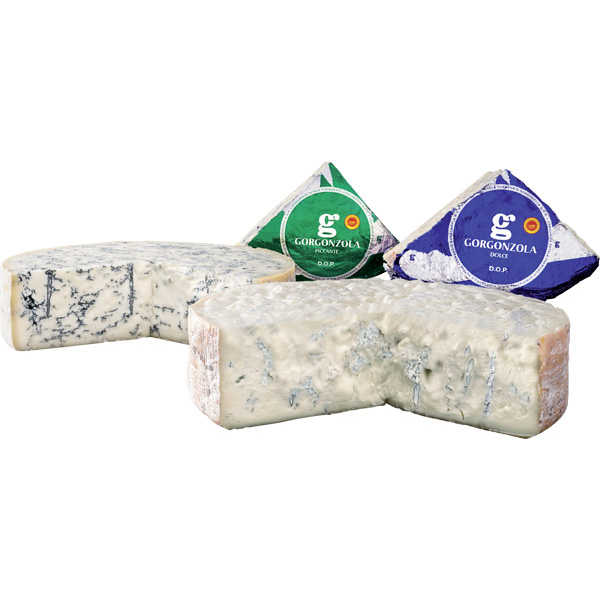 This cheese takes its name from the village of Gorgonzola, on the outskirts of Milan. Gorgonzola Legend has it that this cheese was made there for first time in 879 A.D.
There are some indications that may lead to an even earlier date for the manufacture of the “stracchino di Gorgonzola”. The word “stracchino” itself comes from the adjective “stracco”, that is to say “stanco”, wich in Italian means “tired”: this leads us to the transhumance of cow herds – back in Roman times – from the higher grounds on alpine pastures down to the lower – lying water – meadows in the Po Valley.
Area of production: for the region of Piemont these provinces are: Novara, Vercelli, Cuneo, Biella, VCO and Casale Monferrato with its surroundings, whereas for the region of Lombardy the provinces are: Bergamo, Brescia, Como, Cremona, Lecco, Lodi, Milano, Monza, Pavia e Varese.

It is a raw marbled, soft cheese with a white to straw colour, and characteristic green-blue veining. Soft ad creamy, it has a typically sharp, tasty flavour ; its strength varying according to variety. Produced exclusively from whole cow’s milk pasteurized with the addition of milk enzymes and selected moulds which give it its typical veining. The mild variety is ripened for at least two months, while the stronger variety is aged for more than three months.
Storage: remove the rind and wrap the slices with some tinfoil; if the Gorgonzola is kept in the fridge for too long and gets a very strong taste, mix it with fresh cream and butter, thus obtaining excellent sauces and filling creams.

Preparation:
Remove any little bones from the chicken breasts and chop the latter into pieces of 2-3 cm square. Quickly dredge them in the flour and stir fry them in a pan with a spoonful of oil. Season with the rosemary and some leaves of sage. Let the chicken brown for 5 minutes, add salt and pepper. Sprinkle with the Marsala and let it evaporate; add half a glass of wine and cook for 7-8 minutes
on a medium heat. While the chicken is cooking, add the cubed Gorgonzola after removing the rosemary and the sage from the pan. Cover, lower the heat to a minimum and, once the Gorgonzola has melt, stir and serve.