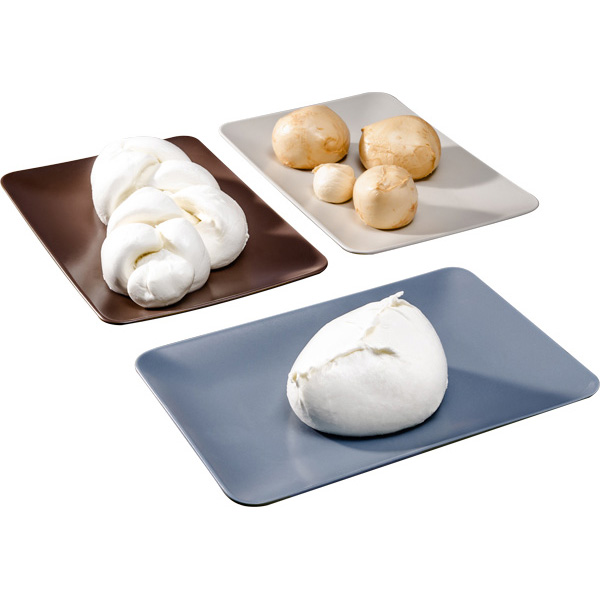 Mozzarella di Bufala Campana is a fresh spun cheese, which owes most of its unique charateristics to the fresh water buffalo’s milk produced in the traditional place of origin. The introduction of the water-buffalos in the Southern Italy start around the year 1000, when the Norman kings set up buffalo farms in Campania region by moving animals from Sicily, where they had been introduced by the Arabs. The first historical traces of the cheese date back to the XII century, when it was called mozza or provatura. According to the PDO rules, the only area where it can be produced includes mostly the Campania Region with the provinces of Caserta and Salerno, as well as some municipalities in the province of Naples, Benevento; the Lazio Region with some parts of the provinces of Latina, Frosinone and Rome; in Puglia Region some municipalities in the provinces of Foggia; in Molise Region the municipality of Venafro. The word mozzarella comes from the verb “mozzare” (to cut off), referring to the manual cut of spun cheese by compressing it between forefinger and the thumb.

Mostly known in its typical ball shape, up to 800 g., other sizes like bocconcini (50 g.), ciliegine (cherry), ovoline, nodini, trecce (up to 3 kg) can be manufactured, as well as the smoked variant: affumicata. The packaging must show the Mozzarella di Bufala Campana and the DOP (Designation Protected of Origin) trademarks. If not promptly consumed, the cheese can be preserved in a fresh place, leaving in the package’s water. If preserved it in the fridge, it is recommended to take the mozzarella out in advance, in order to consume it at room temperature and fully enjoy its taste.

Preparation:
Whisk the Mozzarella di Bufala Campana DOP, cuttlefish and Ricotta di Bufala Campana DOP, then add salt, pepper, lemon peel and flour. Make the gnocchi and then pass them in cocoa butter. Cook and color to the plate with tomato powder. Open the clams in buffalo milk and strain the juice that comes out of clams. Pour into a dish the buffalo milk soup with clams and the gnocchi and decorate with clams. Sauté oiI, garlic and pepper and add to the dish.

*(a recipe by Chef Rosanna Marziale)