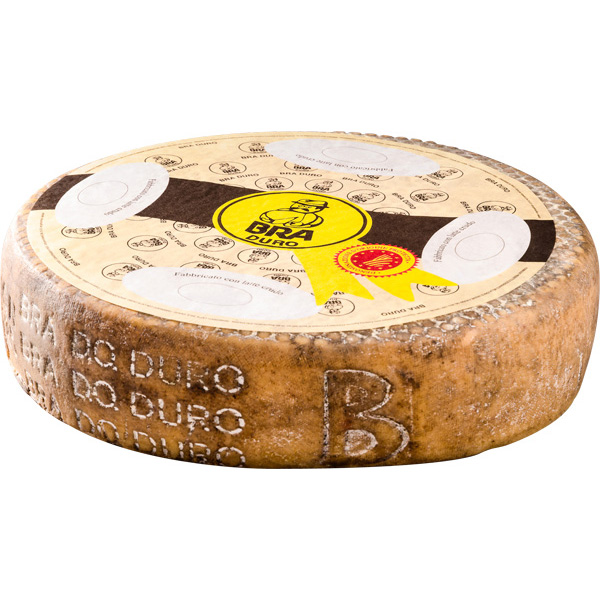 Nowadays not a single cheese of the same name is produced in Bra, and even in the past most came from the villages in the valleys and mountains of Cuneo. However, the traders of Bra used to ripen the cheese and take their “home produce” to markets in Piemonte and especially in Liguria, where it was regarded as an excellent ingredient for preparing pesto sauce. There is still much demand for Bra cheese in the Genoa district. Thanks to its favourable climate and geographical position, Bra became the main centre for collection, ripening and trading of the cheese, which was mostly transported by horse and cart.
Given the demand among emigrants from Piemonte, Bra cheese was also exported to the Americas. This was possible due to its ability to withstand several months at sea without losing any of its characteristics, even in very different climatic conditions. Nowadays Bra cheese is sold in Piemonte, Liguria and Lombardy, and some is exported. The two varieties, Bra “tenero” and Bra “duro” – which were awarded DOC status in 1982 – were registered as DOP cheeses in 1996.
Piemonte is one of the regions of Italy that, more than others, can claim an acient cheese-making tradition and its DOP cheeses are an example of how the skill of its shepherds-cheese-makers has produced real masterpieces for us all to savour. Bra cheese, which takes its name from the Piedmontese city, capital of the Roero area, located on the border between the Langhe and the plain of Cuneo, is one of these exquisite delights.

Bra DOP can be made and ripened in the whole proivince of Cuneo. The ripening area also includes the commune of Villafranca Piemonte (province of Turin). Bra DOP is made from cow’s milk, sometimes adding sheep’s and/or goat’s milk. We can have it as Tenero (soft) or Duro (hard). Both qualities come in a wheel shape with flat surfaces having a diameter of 30 to 40 cm, slightly convex sides between 7 and 9 cm. The weight of each cheese may vary from 6 to 8 kg. Ripening takes place in 45 days for Bra Tenero, and 180 days for Bra Duro.

Preparation:
Boil the potatoes in salted water. In the meantime, separate the egg yolks and whisk the white until thick. When the potatoes are ready, peel them hot, and mash. Add yolks to the hot mashed potatoes and mix well. Add salt, grated nutmeg, and flour until soft and homogeneous. Add the egg white and mix gently. Leave the mixture into the fridge at least half an hour. Bring salted water into a large saucepan to boil. When boiling, pour large spoonfuls of the mixture. As soon as the small “gnocchi” are cooked (some minutes only), they come to the surface. Drain them well using a skimming-spoon and arrange on a warm serving dish. Melt the Bra cheese into milk in a bain-marie, then top the “Donderet” with this warm cheese cream before serving. Recommended wines to accompany this recipe: Barbera or Dolcetto.